Styrenic prices in Asia reversed course around early December. Waning demand and fading support from feedstocks started to exert a pressure on markets in China and Southeast Asia. Priorly, mostly an uptrend had held sway over the markets from May to November.

The weekly average data from ChemOrbis Price Index reveal that import GPPS and HIPS offers on CIF China basis have decreased by 8% ($120/ton) and 6% ($100/ton), respectively, over the past two weeks.

Players attributed declines to weakening demand in the region heading to the year end. “Traditional low season has kicked in. The year-end lull forced suppliers to adjust their prices down after issuing relentless hikes in the previous weeks,” opined a participant in China.

Another factor to drive markets down was lower upstream costs as styrene and butadiene prices moved south earlier in December.

Spot styrene prices on an FOB Korea basis started to retreat from a 2-year high in mid-November, ChemOrbis data suggested. They stood slightly below the $900/ton threshold as of the end of last week, when compared to $1150/ton recorded five weeks ago.

Spot butadiene prices on CFR China basis were down from around a 16-month high of $1310/ton at the end of November. The cumulative loss has reached $150/ton or 11% since then.

In operation news, HDC Hyundai’s 160,000 tons/year PS unit in South Korea restarted in December. Shanghai SECCO’s 300,000 tons/year unit in China was to resume around mid-month, as well. The next scheduled maintenance is planned to take place in late January at Vietnam Polystyrene’s 50,000 tons/year plant.

The resumption of the above mentioned units has eased the supply outlook for PS, adding to the weak market dynamics. 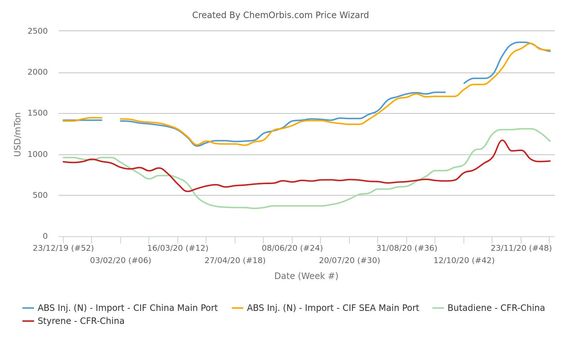 Nevertheless, ABS availability continued to be considered limited which has kept the size of price cuts more modest than PS. A participant opined, “Shipping costs and container shortage are not expected to ease off until mid-Q1. This may counterbalance the impact of weaker costs and sluggish activity to some extent and prevent larger ABS declines particularly in Southeast Asia.”

Import ABS injection offers on CFR China basis have retreated by 4% ($95/ton) since the end of November. Prices were also down by 3% ($80/ton) on CIF Southeast Asia basis in the same period.