Polyolefin markets of Turkey were influenced by bullish factors during the last days of November. New PP and PE hikes by suppliers are on the near horizon despite the fact that the COVID-19 pandemic roared back and caused partial restrictions across the board.

Bullish factors that have lifted the outlook are as follows: 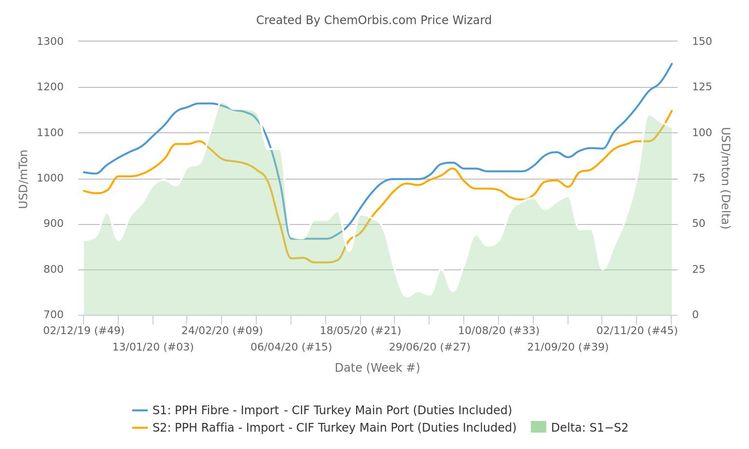 PP and PE prices in Turkey have been mostly on an uptrend since the month of May whereas hikes generally lagged behind those of China’s import market. Thus, an upward pressure from rising offers to China has been in place on Turkish sellers for some time now.

Among key reasons that curtailed larger hikes in the previous months, the highly volatile Turkish lira parity comes to the forefront. USD/Turkish lira parity had spiked to a historical high of 8.54, while Euro/Turkish lira had hit 10 during the first days of November. Following the steepest rate hike in 2 years from the Central Bank, lira recouped some of its earlier losses, meanwhile.

The earlier depreciation of lira kept demand hesitant on the side of many plastic converters in the country, particularly if they are not depending on exports that much. Purchases were tied to needs, except from manufacturers of certain end products for which exports performed well, such as carpets.

Throughout November, demand for PP fibre and LDPE shined out while LLDPE showed the weakest performance for the most part of the month. According to the weekly average data obtained from ChemOrbis Price Index, Turkey’s import market still trades $70-100/ton below the prevailing levels in China for LLDPE and LDPE. The premium of HDPE and homo-PP is no more than around $30/ton.

Successive increases from the domestic producer, Petkim also contributed to the uptrend in PP and PE markets.

A Saudi Arabian major was courageous enough to apply steep December hikes to China. The producer hiked its offers by $200/ton for LDPE film, $100/ton for LLDPE C4 film, $80/ton for HDPE film and $130/ton for homo-PP raffia month-on-month. The news shook Turkish markets on Thursday.

The appreciation of the Chinese yuan against the USD continued to perk up demand for import PP, PE cargos from buyers in the country. A lack of US cargoes in hurricane aftermath kept deep-sea PE volumes tight while overall polyolefin trade has already been disrupted by a lack of vessels and containers in Asia. 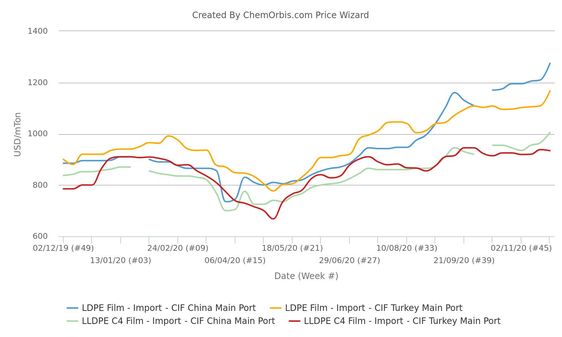 Large traders had hard times setting their fresh prices due to swift hikes in China and higher freights, while most of them refrained from voicing any official offers until next week. “PP and PE prices moved up when compared to the first working day of this week in line with diminishing stocks. We decided to close our November sales earlier in order to gauge the surge in China,” one of them said.

As a side note, participants affirmed this week that manufacturers can use their re-export documents to procure Saudi cargoes without any problem as a previous and unofficial dispute in trade was solved. This spurred hopes that supply from the country to Turkey may ease in the coming days.

Spot olefin prices in Asia contributed to the strong sentiment as they tacked on their gains over the course of this week. Both ethylene and propylene prices headed for the $1000/ton CFR China threshold on the heels of limited availability and healthy demand.

Needless to say, global oil benchmarks which posted $3-4/bbl gains week over week amid vaccine optimism also kept sentiment for feeds on the stronger side.

Looking at Europe, expectations for December were shaped by downstream suppliers’ firmer stance amid some output issues particularly for LDPE. Next ethylene and propylene contracts are foreseen to settle flat or slightly higher, meanwhile. “Polyolefin sellers either issued some increases by late November or closed their order books amid improved sentiment across the region,” said a player.