Polyolefins in Turkey preserved their firm footing moving into October. Higher price goals counted on a lack of stock pressure on the side of Middle Eastern suppliers rather than a bright buying sentiment. Nonetheless, LDPE apparently fell short of this cautious firming.

Import PP and PE markets started to trade on par with or below China in late August/early September depending on the grade. Turkey lagged behind the rapid hikes driven by tight supplies and healthy demand in China, mainly for LDPE, meanwhile.

A plenty of duty free European offers emerged in Turkey amid weak demand in the region. They provided competitive edges for homo-PP fibre, LDPE and HDPE grades during September. 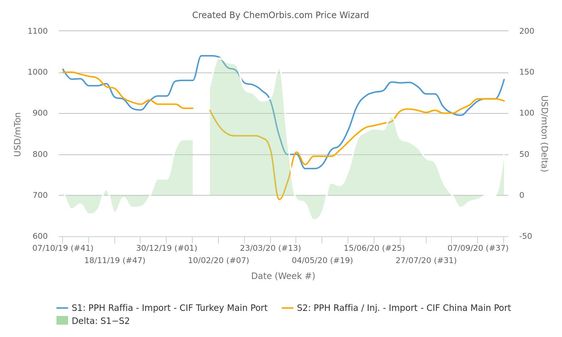 Turkey has been a long way off tempting prices for sellers since H2 August despite some gains. Suppliers have lifted their offers or voiced higher sell ideas for October as well, feeling free from supply pressure thanks to their bulky sales to China previously.

According to the weekly average data from ChemOrbis, Turkey’s import PP raffia market is now carrying a premium of $52/ton over China after trading on par with or slightly below this market since mid-August.

Middle Eastern PP raffia and fibre offers were voiced up to $970-980/ton and $1030/ton, respectively, CIF Turkey, subject to 6.5% duty, but price discussions were thin.

Likewise, some PE producers sought $30-50/ton hikes for October this week. Buyers’ reaction has been lukewarm though based on a week-long holiday in China coupled with highly volatile Turkish lira. According to ChemOrbis data, Turkey’s import LLDPE c4 film market moved $25/ton above China, while HDPE film is carrying a $40/ton premium on a weekly average.

“All eyes have turned to imminent announcements from major Middle Eastern suppliers. Although prices rose, buyers are not that enthusiastic to purchase beyond their basic needs citing the blurry post-holiday outlook in China,” opined a major participant in Turkey.

Players are also curious about whether or not European offers will continue to find their way to Turkey now that October olefin contracts have settled softer in the region. 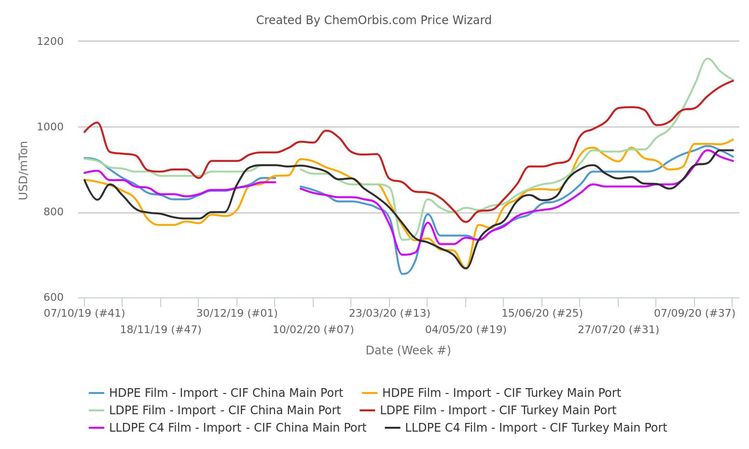